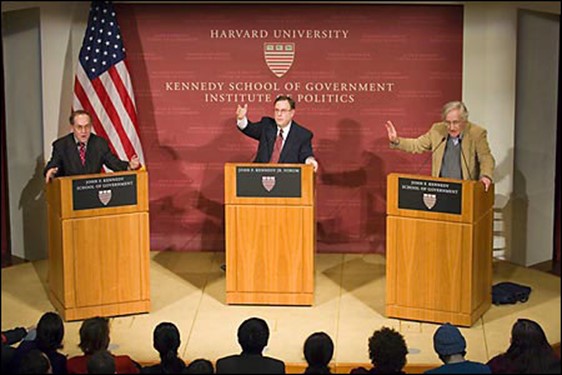 Noam Chomsky’s flirtation with Holocaust denial is even stranger. … Chomsky is a Jew whose parents were Hebrew teachers. He went to the same Hebrew-speaking camp that I did and was actually a member of a left-wing pro-Israel group during his youth. But the published record speaks for itself. The story begins with a strange Frenchman named Robert Faurisson. Faurisson, who was an obscure lecturer on French literature at the University of Lyon, wrote a book and gave talks in which he mocked Holocaust victims and survivors as perpetrators of a hoax. The Holocaust, according to Faurisson, never took place. The Hitler gas chambers never existed. The Jews bear responsibility for World War II. Hitler acted reasonably and in self-defense when he rounded up the Jews and put them in labor camps, not death camps. The “massive lie” about genocide was a deliberate concoction begun by American Zionists—in context he obviously means Jews. The principal beneficiary of this hoax is Israel, which has encouraged this “enormous political and financial fraud.” The principal victims of this fraud have been the German people and the Palestinian people. Faurisson also called the diary of Anne Frank a forgery. Not surprisingly, as soon as Faurisson’s crackpot tome was published, it was seized upon by Jew-haters throughout the world. In the United States, the notorious Liberty Lobby, which distributes The Protocols of the Elders of Zion and other anti-Semitic best-sellers, translated the most hateful portions of the work and distributed them widely within its network, touting the fact that Faurisson was a professor! His videotaped speeches were distributed for use at neo-Nazi gatherings. I sent for one such video and watched Faurisson smile when describing the “alleged victims” of the “nonexistent” gas chambers. His neo-Nazi audience laughed as he mocked the testimony of survivor eyewitnesses. Following the publication of Faurisson’s book, the University of Lyon suspended him for a semester, claiming that it could not guarantee his safety. This decision, understandable as it may have been considering the fact that Lyon suffered greatly during the Nazi occupation, was improper and foolish. A teacher has the right to be protected even for espousing idiotic views.

Chomsky was asked to join in protesting Faurisson’s suspension. I am sure that he welcomed the opportunity, because Faurisson’s writings and speeches are stridently anti-Zionist as well as anti-Semitic. Indeed, Professor Chomsky has himself made statements about Zionist exploitation of the tragedy of World War II that are not, in my view, so different from some of those of Faurisson. He has also compared Israel with Nazi Germany. Chomsky defended Faurisson not only on the issue of free speech but also on the merits of his scholarship and character. He signed a petition that characterized Faurisson’s falsifications of history as “findings” and said that they were based on “extensive historical research.” Had Chomsky bothered to check on Faurisson’s historical research, he would have found it to be faked. There was no extensive historical research. Instead, there was the fraudulent manufacturing of false antihistory. It was the kind of deception for which professors are rightly fired—not because their views are controversial but because they are violating the most basic canons of historical scholarship. Yet Chomsky was prepared to lend his academic legitimacy to Faurisson’s “extensive historical research.” Now, not only was the Holocaust “disproved” by a professor but the professor’s research and findings were certified by another professor—this one from MIT!

First, the actual issue has not yet even been addressed. Recall the facts. A professor of French literature was suspended from teaching on grounds that he could not be protected from violence, after privately printing pamphlets questioning the existence of gas chambers. He was then brought to trial for “falsification of History,” and later condemned for this crime, the first time that a modern Western state openly affirmed the Stalinist-Nazi doctrine that the state will determine historical truth and punish deviation from it. Later he was beaten practically to death by Jewish terrorists. As of now, the European and other intellectuals have not expressed any opposition to these scandals; rather, they have sought to disguise their profound commitment to Stalinist-Nazi doctrine by following the same models, trying to divert attention with a flood of outrageous lies. So, the issue has not been settled, or even addressed.

Second, as to the minor matter of my role, that has also not been addressed, though it has been the subject of a flood of lies and deceit on the part of those who want to disguise their own commitments, and on the part of groups like Americans for Safe Israel (ASI), which have their own agendas, namely, to defame and discredit anyone who does not meet their standards of support for Israeli militancy. […]

Now your first question. The “statement” to which you refer is a distortion of something that I wrote in a personal letter 11 years ago, when I was asked whether the fact that a person denies the existence of gas chambers does not prove that he is an anti-Semite. I wrote back what every sane person knows: no, of course it does not. A person might believe that Hitler exterminated 6 million Jews in some other way without being an anti-Semite. Since the point is trivial and disputed by no one, I do not know why we are discussing it.

In that context, I made a further point: even denial of the Holocaust would not prove that a person is an anti-Semite. I presume that that point too is not subject to contention. Thus if a person ignorant of modern history were told of the Holocaust and refused to believe that humans are capable of such monstrous acts, we would not conclude that he is an anti-Semite. That suffices to establish the point at issue.

The point is considerably more general. Denial of monstrous atrocities, whatever their scale, does not in itself suffice to prove that those who deny them are racists vis-a-vis the victims. […] Similarly, numerous scholars deny that the Armenian genocide took place, and some people, like Elie Wiesel, make extraordinary efforts to prevent any commemoration or even discussion of it. Until the last few years, despite overwhelming evidence before their eyes, scholars denied the slaughter of some 10 million native Americans in North America and perhaps 100 million on the [South American] continent. Recent studies of US opinion show that the median estimate of Vietnamese casualties [resulting from the Vietnam War] is 100,000, about 1/20 of the official figure and probably 1\30 or 1\40 of the actual figure. The reason is that that is the fare they have been fed by the propaganda apparatus (media, journals of opinion, intellectuals, etc., “scholarship,” etc.) for 20 years. We (at least I) do not conclude from that fact alone that virtually the whole country consists of anti-Vietnamese racists. I leave it to you to draw the obvious analogies.

In these and numerous other cases, one needs more evidence before concluding that the individuals are racists. […]

You ask whether one wouldn’t at least suspect the motives of someone who denies genocide (the Holocaust, in particular). Of course. Thus, I do suspect the motives of Wiesel, Bernard Lewis, the anthropological profession, the American Jewish Congress and ASI, Faurisson, Western intellectuals who systematically and almost universally downplay the atrocities of their own states, and people who deny genocide and atrocities generally. But I do not automatically conclude that they are racists; nor do you. Rather, we ask what leads them to these horrendous conclusions. There are many different answers, as we all agree. Since the points are again obvious, a rational person will proceed also to question the motives of those who pretend to deny them, when it suits their particular political purposes. In this respect too the Faurisson affair is far from “settled,” as you put it; in fact, the issues have yet to be addressed. In fact, they will never be addressed, because they reveal too much about Western intellectual culture.

Chomsky went even further. After signing the petition, he wrote an essay that he allowed to be used as a foreword to Faurisson’s next book about his career as a Holocaust denier! In this book, Faurisson again calls the gas chambers a lie and repeats his claims about the hoax of the Holocaust. Chomsky, in his foreword, feigns ignorance of Faurisson’s work—”I do not know his work very well”—but concludes that Faurisson’s arguments are not anti-Semitic and that Faurisson himself is neither an anti-Semite nor a Nazi but rather “a sort of relatively apolitical liberal.”

I simply cannot understand how a Jew who was himself alive during the Holocaust and who calls virtually anything with which he disagrees “racism” can fail to see even a hint of anti-Semitism in the work of a man who describes the Holocaust as a “hoax” and “fraud” perpetrated by Jews.

Nor can I understand how a Jew could say with reference to the Holocaust, “whether one believes it took place or not”—thus suggesting that reasonable people could believe either that it did or did not take place.

Chomsky responded by arguing that Faurisson was an anti-Zionist rather than an anti-Semite because he denounced “Zionist lies.” He charged that “Dershowitz’s easy translation of ‘Zionist’ to ‘Jewish’ is illegitimate,” and that, “in fact, it is a standard gambit of anti-Semites.”

“It is so obvious that there is no point in debating it because nobody believes there is an anti-Semitic connotation to the denial of the Holocaust.”

The civil liberties–free speech rationale does not work for Chomsky: civil libertarians who defend the free speech of neo-Nazis do not get into bed with them by legitimating their findings as having been based on “extensive historical research” and by defending them against well-documented charges of anti-Semitism. Moreover, providing a foreword for a book is joining with the author and publisher in an effort to sell the book. It is intended not merely to leave the marketplace of ideas open. It is intended to influence that marketplace substantively in favor of the author’s ideas.

Paul L. Berman, writing for the Village Voice, got it exactly right: “Chomsky’s view of anti-Semitism is positively wild. His definition is so narrow, neither the Protocols of the Elders of Zion nor the no-Holocaust delusion fit into it. . . . I am afraid that his present remarks on anti-Semitism and Zionist lies disqualify him from ever being taken seriously on matters pertaining to Jews.”

Yet Chomsky, despite his long track record of mendacity about Israel and his perverse views of anti-Semitism, continues to be taken quite seriously in matters pertaining to Jews by legions of students and professors around the world. He has even taught a course that includes this subject at Harvard’s Kennedy School of Government despite the fact that he is a linguist with no professional credentials in this area, other than his onesided opinions.

52 gedachten over “Is holocaustontkenning antisemitisme?”